Home and Lifestyle, In the Kitchen

Moving to a cup

Choosing the first cup for your baby can be quite difficult. Largely because there are just so many cups to choose from and often you won’t know if they like the cup, or how easily they can use it, until you have given it a go.

I must have bought at least 15 different cups with my first child and they either leaked or she wasn’t able to get anything out of them. It was really hard and very frustrating.

I eventually settled on these Nuby cups with a silicon teat similar to a bottle. Although she was breastfed she would often have a bottle of expressed milk at bedtime and she quite liked her bottle.  She took quite well to the cups and although they were not totally spill-proof, they were better than a lot of the ones I had bought and she liked them.

When she was older I moved on to an anywayup cup, and these were great as they didn’t spill at all. When she was younger she couldn’t suck hard enough on these though, so they were much more suited to the older age group. We still use these now.

When it came to the other children, I had learnt from my prolific cup buying mission and was a bit more selective in what I purchased.

We have largely gone for the anywayup cup, but when the children are very young these do not work well so it was back to Nuby for their Free Flow First Cup. These will be on sale in June of this year and widely available.

This little man has only tried expressed milk in a bottle once since birth as I simply don’t have time to express, so with water in the cup it was taking him a while to figure out what to do as you can see – he hasn’t quite mastered it yet! 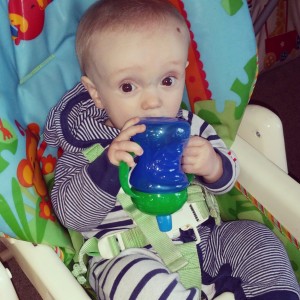 These cups are really easy for little fingers to hold on to them (even if it is upside down for now) and unlike lots of cups this is easy to clean and assemble for use. These are clearly quite appealing to children as well, because he had to fight off his big brother to keep hold of this one!

All in all, a great first cup and doubles up as a teething aid too apparently!