What can children learn from television?

I always find the subject of television and children a little controversial.

I’ve heard some parents argue until they are really blue in the face that television is bad for children and creates non-communicative zombies. I have also heard parents at the opposite extreme refer to the television as “the baby sitter” and admit that their pre-schoolers just sit watching television all day.

Check out this article from The New York Times – there are some interesting points in this which you might be able to relate to.

For me the answer is the same as many things in life – it is all about balance and making sensible choices.

Of course it is not good for children to watch television all day, every day but it is also OK to do that some of the time.

There are programmes which I wouldn’t say offer a lot in terms of learning but there are many that offer a considerable amount.

For example, our children know quite a few Spanish words – that is courtesy of watching Dora The Explorer. They understand about adhesion and trajectories courtesy of Blaze and the Monster Machines. They understand about elements as a result of seeing Cloudbabies and programmes like Bing (as annoying as we might find it as parents sometimes) have important messages that can help you explain a range of things to your children.

I would argue that certain television programmes can teach children a range of things and whilst this should never replace what you can offer your child by spending time with them, it can also spark an interest in something, such as gardening or learning sign language (Mr Bloom and Mr Tumble) and therefore it is perfectly fine to form part of the week.

The learning process can be extended by some of the toys available that are linked to the shows your children might watch.

For example, the new Cloudbabies toys can help children learn about colour and texture and are designed to be sensory toys that appeal to both girls and boys. When children can relate real things they can touch to things they see on the television this can further enhance their learning. 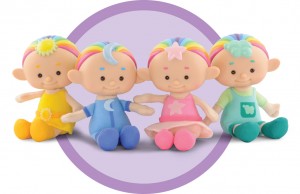 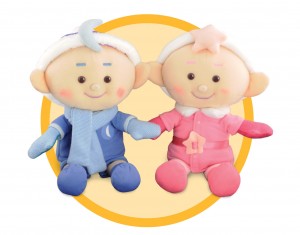